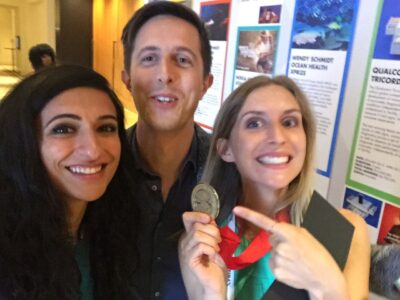 Collaborating to Save our Coral Reefs

When XPRIZE launched “Visioneering 2018” they invited anyone with the drive and passion to help them design the next XPRIZE. Entries into this competition had to come under the ambitious themes of, Feeding the Next Billion, Lifting Farmers out of Poverty, Off-Grid Energy, Natural Disaster Prediction and Saving Coral Reefs. You can probably guess which one our team entered.

Our small team consisted of myself and several brilliant consultant. This included my brother, James Beresford, Mahima Suhkdev from Xynteo, and Vincent Kneefel from Accenture. We were lucky to later be joined by Richard Vevers, CEO of The Ocean Agency offering his expert guidance and pitching abilities.

The task was simple – design a fund with that would incentivise the creation of innovations and developments that would tackle the coral crisis at a global scale. So actually not simple at all, as we soon discovered!

After an ambitious initial application and a hilariously amateur pitch video, we found ourselves in the semi-finals of the competition. In August we flew out to LA slightly in shock and unprepared for what was about to hit us, and what hit us was an “XPRIZE Hackathon” event. This was 48 hours of  XPRIZE training, pitching, grilling, advice, drinking gallons of coffee and more pitching. At the end of this weekend event, we had totally pivoted on our original design idea, met some wonderful people and were thrilled to be through to the Visioneering finals. We went into the competition with an idea based on intelligent reef substrates. We came out with a much bigger bolder design based around incentivising scalable innovations for global coral resilience and survival.

We then had 8 weeks before the Final  (known as Visioneering Summit). In that time we were tasked with refining our design to professional XPRIZE standards. To do this, we had to obtain expert advice, contact leading organisations, researchers and companies who could potentially fund or compete for our fund if launched and obtain feedback before creating a Hollywood standard pitch.

Of course, there are many things we need to tackle to save coral reefs. If we don’t put a lid on anthropogenic climate change more things than coral reefs will perish and the latest IPCC report has given us 12 years to radically change our trajectory. And of course, we still need reef protection through MPA’s, sustainable fisheries and tourism practices to save these incredible ecosystems and the lives of the ½ billion people who depend on them. But there is a growing consensus and acceptance that to save our coral reefs at scale, alongside the traditional protection and management,  we need to look to more radical solutions. This is where we feel an XPRIZE can help.

One of the most important aspects of XPRIZE is the traction they have as an organisation. Furthermore,  they have the key ability to mix things up, galvanising people across various fields to look at a problem from new and unique angles. This is something we feel is important in tackling the coral crisis. Imagine… what if material scientists, genetic biologists, engineers, architects were working with the marine science community to help save reefs. What innovation and investments could come out of such collaborations?

When looking to design this prize we saw 3 main problems with reef restoration today.

These three points were at the foundation of our XPRIZE design.

The Visioneering Summit took place in October 2018 in a beautiful spot just outside LA. It was attended by 400 impressive (and slightly intimidating) invitees alongside the competing Visioneering teams. A staged event where all the “Visioneers” gave their final pitches, we had time to network, chat and obtain support for our design idea and theme.  After several ideas, all teams had presented their idea. Then, attendees voted for the best designs with the overall winner’s design would be launched as the next XPRIZE.

Pitching our prize design on the big stage was one of the most terrifying and exhilarating things I have done. It was a close competition as all the designs were incredible and full of important innovations that I hope will be developed, but I’m very happy to say we won!

Winning the XPRIZE Visioneering challenge captures the attention of philanthropists and investors who we hope are now more enlightened and invested in the survival of our reefs. XPRIZE will now launch a multi-million-dollar Corals prize fund. Worldwide teams can enter to develop innovative and scalable solutions that will protect and restore our coral reefs.

Through the XPRIZE journey we got to interact and sell coral reefs to a whole new audience. I also undertook more public speaking than I believed I could (and strangely liked it in the end) and we have pushed the limits of our jet-lagged brains. We learnt a lot, and met a lot of incredible people.