By Abbie Hine on October 2, 2012 in Resort Marine Educator Blog 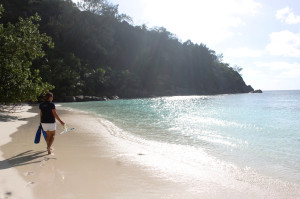 Rosie is the WiseOceans Marine Educator at Four Seasons Resort Seychelles; helping to provide an extra element of marine conservation knowledge to the resort. Rosie gives regular talks enlightening the guests on the creatures on the reef as well as guided snorkels. Rosie also gives evening talks on subjects such as shark, turtles, whales and dolphins, coral and whale sharks.

Keep up to date on the goings-on in the marine world at Four Seasons Resort Seychelles!

What do we see?

Here at Petite Anse we see creatures, large and small! From the smallest nudibranchs and juvenile fish, to bumphead parrotfish and juvenile whale sharks.

The reef is full of life, and we see surgeonfish, butterflyfish and parrotfish on every snorkel. Sergeant Major Damselfish and Six-bar Wrasse are the friendliest of the fish on the reef, swimming close to snorkelers in a curious manor. Six-bar wrasse have the most incredible colourings, from turquoises to pinks and purples, which shimmer when they catch the light.

Striped surgeonfish are seen whenever snorkeling over the left hand side of the reef, either at high tide, over the shallower water, or further out in the bay close to the granite rocks. They swim close to the coral, and their name describes them perfectly having blue and yellow stripes across the length of their body.

The unicornfish here at Petite Anse are one of the larger fish on the reef, growing over 50cm long. The spine protruding from the head makes the males easy to identify. The orangespine unicornfish are equally as large, but with a black body and an orange fin along their spine. Unicornfish are known for their speed, which is their best defense mechanism. Otherwise, like their smaller surgeonfish cousins, they have two pairs of scalpel like forms on either side of their caudal peduncle (part of the body between the body and the tail), which on the orangespine unicorn fish are bright orange!

We often see Guineafowl Pufferfish, a darker puffer with small white spots over the body. We see them closer to the rocks, using their fins to propel them through the water in a clumsy manor. We also have lots of Model Tobys, a smaller fish related to the Pufferfish. They are seen in pairs swimming close to the reef. They are shy, timid creatures but intriguing to watch.

Parrotfish are seen grazing over the corals, munching away at the hard coral to get the fleshy coral polyp inside (sometimes you can hear them chewing at the coral!). They are all different colours- some are bright blues and purples, others deeper browns and mauves. They are fast swimmers, and can easily swim away from larger fish and snorkelers!

The more romantic butterflyfish are thought to mate for life, so if you see one it is more than likely you will see another! Raccoon butterflyfish school on the reef here at Petite Anse, forming groups of maybe 15-20 in the shallower waters. Butterflyfish are reasonably shy, but will pose for photos!

We also see a lot of squid on the reef. At first glance you may think that they are just another fish, but squid group in a horizontal line, maybe a meter under the surface of the water. Usually there is perhaps 10-15 in a school, but recently I came across a school of over one hundred!

One of the creatures that is often overlooked by snorkelers and divers when in the water is the coral itself. Here at Petite Anse there are many varieties of coral to be seen, ranging from the flat table corals, to larger boulder corals. Snorkelers and divers often forget that the coral is also a living animal. Each of the small dips on the surface of the coralline structure contains a small animal. As they live in the upper parts of the water, they secrete a gel like substance that protects them from the harsh rays of the sun. If a snorkeler or diver touches the coral it removes this layer, harming the animal. Here at the Four Seasons Resort Seychelles, we encourage the guests not to touch or stand on the coral.

These are only a few of the kinds of fish and invertebrates you will find here at Petite Anse, I will be posting about more that we see, all of which can be seen in the Gallery.