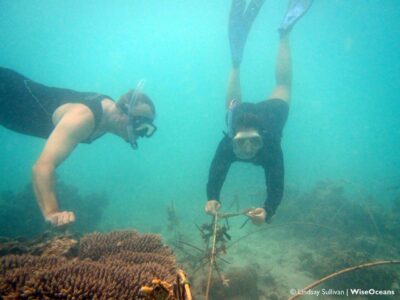 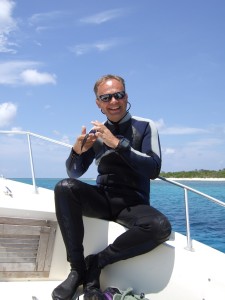 Tim Ecott is the author of the international best-seller ‘Neutral Buoyancy: Adventures in a Liquid World’ and scriptwriter for the BBC feature film ‘Deep Blue’.

Corals, and the reefs that they create are notoriously complex organisms – not for nothing are they called the rainforests of the sea. Coral restoration projects have been around for a few years now, and I’ve seen them first hand in the Caribbean and the Maldives. They are still a new concept in Seychelles, but having seen Lindsay Sullivan put down the first coral frames at the beginning of 2015, I was curious to see how well the WiseOceans project was progressing. My latest visit coincided with the North West trade winds, and it was a blustery day on Petite Anse. White caps were visible across the bay and the swell looked exciting for junior surfers – but not immediately enticing for snorkeling. 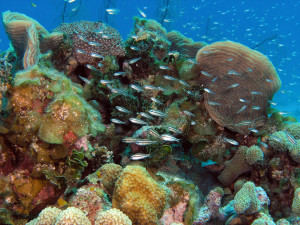 Working as a dive-master, I remember the coral reefs of Mahé before the disastrous bleaching events of 1998. We probably didn’t appreciate how rich the reefs of the granitic islands were then. All the coral reference books seemed to tell us that the best coral reefs were to be found in impossibly exotic destinations like Papua New Guinea, Borneo or Sulawesi. I would later visit those far off places, and, gradually come to realise that it is coral, and the things that live on it, hide in it, eat it and even breed in it that are the true basis for my love of being underwater. I have been lucky enough to dive with many sharks, dolphins and even whales. I have swum with a hundred manta rays and looked into the eye of an eight metre long orca in a chilly Norwegian fjord. All of those encounters are etched into my mind, but when I dive it is the coral that draws me most strongly. 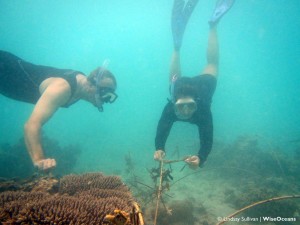 Neutral Buoyancy author, Tim Ecott popped by the Reef Restoration Project nursery recently to take a tour of the nursery.

Now, when I look back at old film of those familiar dive sites on Mahé I understand how lucky I was to see Seychelles’ reefs in robust health. And I remember too how deeply saddened I was when I returned to dive in 1999 and found that many of the sites I loved were unrecognisable, coral graveyards covered with unsightly grey rubble and missing the fish and invertebrates I had come to regard as friends. The corals are slowly returning in many places, but all over the tropics they face increasing threats, not least of all from climate change.

Swimming out through the breakers with Lindsay and Tania from WiseOceans brought us over the hundreds of coral fragments suspended above the sand, where, remarkably they seemed immune to the rough actions of the waves. Little budding sprigs of life were all around, swarming with fish, and in some places even attracting other species of coral to colonise the wire supports on which they grow. The Petite Anse project is just beginning, but already there are many more branching corals alive and ready for transplanting onto sites which used to be covered with their ancestors. I hope that like a nursery of plants which will one day replenish a forest, these ‘baby’ corals thrive.  And that many visitors will see them and be inspired to learn more about these fascinating creatures – half-plant-half animal that fill me with wonder every time I stare at them.