The Start of Summer in the South

Home » News & Blogs » The Start of Summer in the South

After arriving back from vacation in autumnal England I was happy for the warmer weather and water. Now whether this was due to acclimatisation of the British weather or whether things really had warmed up was proved by my trusty dive computer – the water temperature has risen a few degrees making the need for two wetsuits seem laughable. 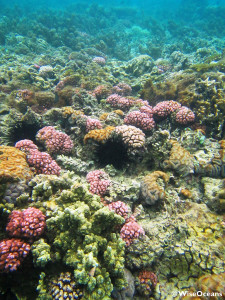 However not everyone will be appreciative of the extra few degrees. Corals are small animals called polyps, and are incredibly susceptible to changes in their environment. They optimally grow in shallow areas where the water temperature is between 23-29oC; however, some can tolerate up to 40oC for a short period of time[1]. Corals gain energy through the process of photosynthesis thanks to an algae species (zooxanthellae) housed within the coral tissues. A rise in temperate above a critical level causes the symbiotic algae to leave; resulting in a white appearance. This is termed coral bleaching and prolonged periods of this can lead to coral death. For most corals around the world, effects of bleaching are noted when the water temperature rises above 30oC. However, the climate in Mauritius is cooler. It is a low latitude reef and therefore it is probable the threshold temperature for corals is ~27.5oC. Another interesting note on coral bleaching in Mauritius is to look back at the most extensive coral bleaching event in the Indian Ocean which killed up to 80% of corals on reefs across the Indo-Pacific region and the Great Barrier Reef. This occurred in 1998 as a result of an El Niño atmospheric event and surprisingly <10% of corals in Mauritius were affected by this event [2].

Each month as part of my role as WiseOceans Marine Educator at Four Seasons Resort Mauritius at Anahita I monitor the coral reef for effects of bleaching through a survey called CoralWatch. CoralWatch is a citizen based science project run by the University of Queensland, Australia to increase awareness and effectiveness of reef management. The Coral Health Chart evaluates the colour intensity of coral colonies and data is uploaded to a global database where you can view the conditions of reefs worldwide. CoralWatch enables us to measure trends and improve our understanding and capacity to conserve reefs.