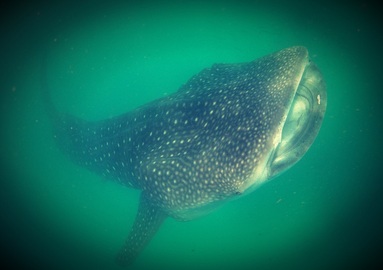 So it is now the very end of August and while all northern hemispherites are enjoying the final throes of summer, we in the southern hemisphere remain in the wild grips of winter. All the way down at 7° south of the equator, the Seychelles’ winter means temperatures as low as 26° C, significant cloud cover and a cool(ish) breeze. Any cooler in fact and I’ll be reaching for my WiseOceans cardigan. (They don’t exist, but wouldn’t they be nice!).

The southeast winds which begin around May time and drive these weather changes also have rather a dramatic impact on the sea surrounding the Seychelles. The 32°C water temperatures of March and April have taken an alarming nose-dive and are now sitting smugly between 24° and 26°C (cold enough for wimps like me to wear one wetsuit on top of another and still turn blue during a dive; only vanity prevents me from donning a wetsuit hood). And yet this is still my favourite season of all….

What’s awesome about the Seychelles’ sea during the southeast seasons not its thermal resemblance to the English Channel, but that it is oh so full of nutrients. This leads to blooms of plankton thick enough that at times you can 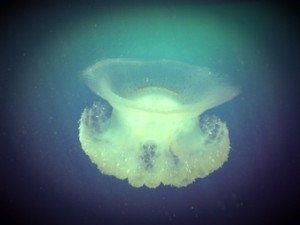 actually ‘taste’ it through your snorkel air (it’s not good – that’s not the awesome part) and plankton is so absolutely vital at the start of the food chain, that it brings with it a myriad of other marine life. So, these last few weeks, snorkelling in Petite Anse has been more exciting than ever with more marine life than ever before, it’s just a little, shall we say… different!. Check out these incredible jellyfish for a start. Neither are stingers (fortunately for me since while diving down to take pictures of one of them, I accidentally head-butted it – ever the professional!) and they are somehow lacking the charisma of eagle rays and turtles, yet to me these jellyfish are all the more awesome because few of we ‘experts’ actually know much about them. Also because one of them actually has fish living inside it and I would really like to see a turtle try that. 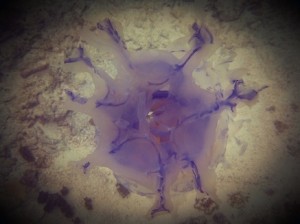 The enigmatic quality of the cool, mysterious waters gives the sense that you really don’t know what you might see. Indeed we’ve had not only weird and wonderful jellyfish, but LOADS of squid and an army of cornetfish here to feed on the schools of baitfsh, (which make you feel like you are in an aquarium as you swim through them), plus many sightings of Nigel, our hawksbill turtle, octopus, a few bumphead parrotfish, the usual eagle rays… oh yeh and a scalloped hammerhead shark! Possibly the best moment of my life. These sharks are shy and elusive, not a threat to snorkelers and such a very rare sighting that the two lucky guests and I were celebrating it for days after! It was incredible, and only the second shark that I have seen in Petite Anse in the 7 months that I have been here. While that might make some people happy, it makes me sad that there are not more of the many non-threatening sharks around. Speaking of sharks, the cherry on the southeast season cake is of course the whale sharks! That is a big cherry. During the last month a few lucky Resort guests have sensed things going a bit dark during their dives at nearby sites, only to look up and see a whale shark swimming over their heads. No joke or exaggeration! So the sharks are starting to appear, here to eat all the stinky plankton, and we hope that the next 6 – 8 weeks bring many, many more! Here’s hoping our next blog post is absolutely shark-infested. Happy International Whale Shark Day!
(for yesterday :-))