It is fast approaching the three-year anniversary of our Reef Restoration Project here in Petite Anse, Seychelles and we wanted to talk more about the history of corals in Seychelles and highlight some of the trials, tribulations and triumphs of our Reef Restoration Project. In 1997-98, Seychelles experienced a major setback in coral health when the region was exposed to a severe El Niño Southern Oscillation event (read more about it here). This event caused what is known as ‘mass coral bleaching’ and was a global phenomenon that resulted in a 16% loss of the world’s coral. Here in Seychelles specifically, it is estimated that the event reduced coral cover to between 3 and 5%. The reefs in the inner islands were worst hit with changes from coral dominated reefs to rubble and algal dominated reefs.

As you can imagine, watching the reefs around Seychelles being affected this way was never easy! So together with Four Seasons Resort Seychelles WiseOceans decided to develop the Petite Anse Reef Restoration Project with the aim of giving the reef system in Petite Anse a helping hand, to try to positively impact the function of the reef and provide education to those visiting the bay about reef restoration and coral reef ecosystems.

Between June – September 2014, construction got underway to install rebar in a shallow section of the reef which was soon to become our in-situ shallow Coral Nursery. This nursery consisted of approximately 200 semicircle rebar frames which would provide the surface for us to hang our flat bar with baby coral fragments from (find out more about our restoration method here). It was then time to add new corals to the nursery. As of January 2015, the hard coral cover on the Seychelles’ inner islands had return to pre-bleaching levels of ~42%, an estimation of approximately 17 years to recover to pre-1998 diversity. This meant we were not only able to successfully harvest fragments from wild donor colonies within the bay but rescue a lot of small fragments that had broken off through wave action, grazing animal damage, and human disturbance.

We had a busy first year, building up the coral nursery and trialing what did and did not work for our bay. In the nursery we focused on growing a range of coral genera such as Acropora, Pocillopora, Goniastera, Gonipora, Porites, Favites, Galaxea, Favia, Echniopora, and Pscammocora. 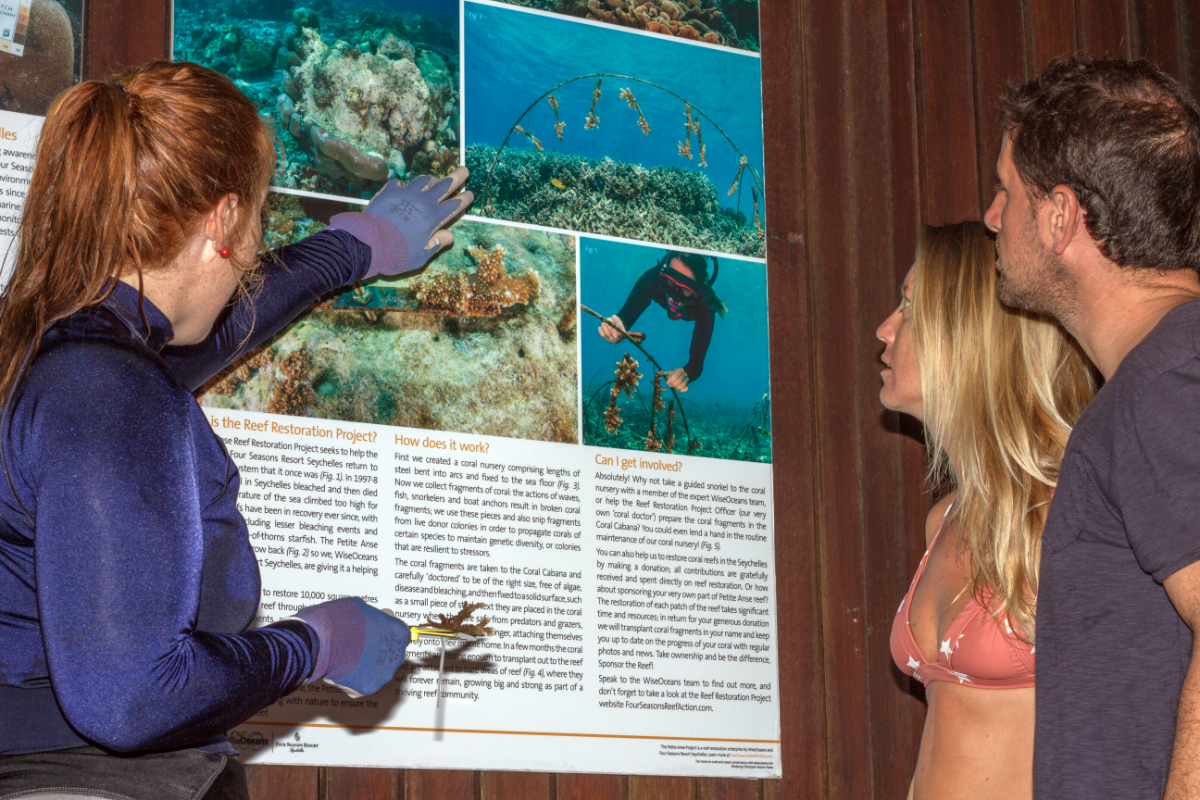 Despite the positive trends in coral abundance observed between 1998 and 2015, recovery of coral reefs in Seychelles was interrupted in the first half of 2016 by another mass coral bleaching event because of prolonged high seawater temperatures. In the Western Indian Ocean, Seychelles was the most affected by this bleaching event with over 50% of monitored sites showing high bleaching, closely followed by Tanzania and Mauritius. At some sites, mortality due to the event exceeded 90%.

At the peak of the event, WiseOceans determined 75% of the Petite Anse shallow reef (<7m) was severely bleached. In the Coral Nursery, we had a devastating blow! There was close to 100% mortality of some 2,500 coral colonies we had growing and were ready to transplant onto the shallow reef. Mortality was highest in the genera Acropora and Pocillopora.

By early August 2016, some corals were still showing signs of bleaching despite sea temperatures having returned to normal for over 2 months. The number of corals in our Coral Nursery went from 2,500 corals to approximately 350 corals. 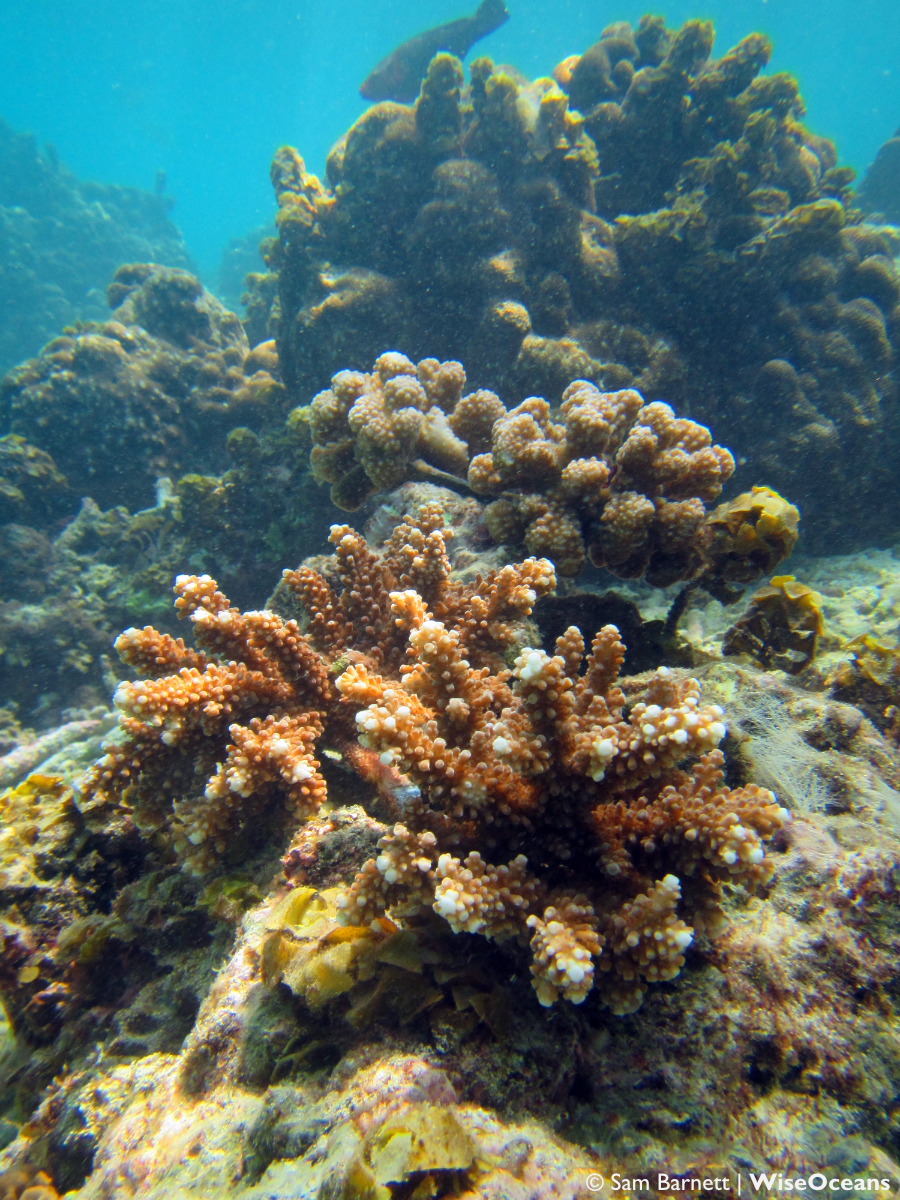 In September – December 2016, we started to rebuild, concentrating our efforts on increasing our coral numbers in the nursery. We also knew we needed to be prepared for future bleaching events, so we constructed a deep Coral Nursery in February 2017 which consisted of rebar at approximately 8m in depth.Despite the hardship of 2016, 2017 was our most successful year and this success has continued now into 2018! Our shallow Coral Nursery currently holds ~750 coral colonies across ~350 flat bar and the deep Coral Nursery holding ~50 coral colonies over ~30 flat bar. The most rewarding aspect of our three years in action however, has been the successful transplantation of corals back onto the house reef here in Petite Anse.

We have to date, transplanted close to 60 colonies from the genera Acropora, Pocillopora, Porites Favia, Galaxea, Goniastera and wonderfully, all colonies are currently thriving. Not to mention we have been able to connect and educate hundreds of people about coastal reef rehabilitation and the importance of coral reef ecosystems!

We would like to sincerely thank the many donations WiseOceans have received from all across the globe, as well as Four Seasons Resort Seychelles for making this project possible!

If you would like to sponsor a plot on the reef you can do so here! 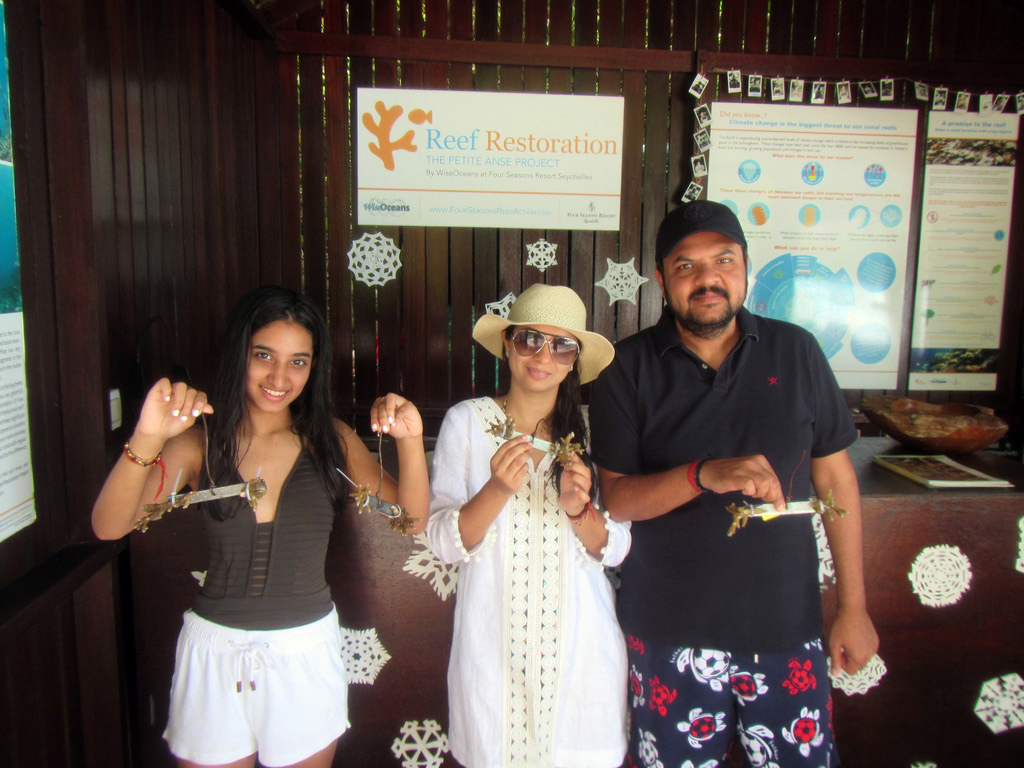