By Abbie Hine on October 4, 2012 in Resort Marine Educator Blog 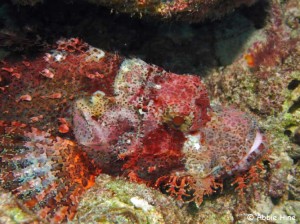 Life on the coral reef is dangerous. The way that the world works, if you are not at the top of the food chain, there is something trying to eat you. If it is not another fish, or marine creature, it is a human.

That is why Mother Nature was kind enough to give some of the creatures on the reef the ability to disappear…well, the useful art of camouflage. This means that they are difficult to see on the reef, so that they are reasonably safe from predators.

The scorpion fish family is one of the best at disguising themselves. Stonefish, unsurprisingly, look a lot like stones. Even to the point that they have algae growing on them. In some cases, it is only from their over expressed downward turning mouth that you can see them! They are sedentary creatures, moving very little, which means that they have to wait for their prey to pass in front of them, shooting out their jaw to catch the smaller fish! Their inactive lifestyle means that if you can remember where the stonefish is, you can go back to it over and over again. There is one resident stonefish at Alice in Wonderland (an active dive site in nearby Anse a la Mouche) that is always pointed out to divers.
Their cousin the Scorpionfish is similar to the stonefish, in the way that they can blend into the coral completely. They are a lot more ‘fish’ like though, rather than stone-like. They move around the reef more than the stonefish, meaning it is more likely that you will see one. We have seen one scorpionfish at Petite Anse, whether it will be found again is another question!

Octopus demonstrates one of the most amazing examples of camouflage in the marine environment. However, it has the additional advantage of having no bones, so that it can squeeze into the smallest cracks and crevasses to hide! Octopus can change their colours and markings to the same as their surroundings, as well as changing their texture to be bumpy like the coral, or smooth like sand! It is only the trained eye that can see octopus when they are in this state (it also helps if they move when you are looking in the right place!). They do not only change colour for camouflage, they can also emit warnings and emotions by changing their colours.

Paperfish are one of the more peculiar looking fish on the reef. They use their thin, transparent skin to disguise itself as just another piece of weed stuck on the coral. It will sit in the same place hour on end wafting in the surge so not to be discovered. There is a resident paperfish at Alice in Wonderland, hiding under a coral overhang, which is pointed out to divers.

One of the most intricately patterned fish on the reef is the foursaddle grouper. A lot of the guests that I take out snorkelling are able to spot the foursaddle grouper because unlike the stonefish and scorpionfish, they tend to move over the reef making them easier to spot! They are covered in polygonal brown spots, making them the same colour as the reef, and the different shades of brown means that it blends into its habitat. It is because of their nervousness, caused by other fish getting close to them, that snorkelers can easily spot them.

So, although fish are thought to be some of the more simple creatures on out planet, it can be seen (or not seen) that some are actually incredibly smart, fooling those who need them the most!