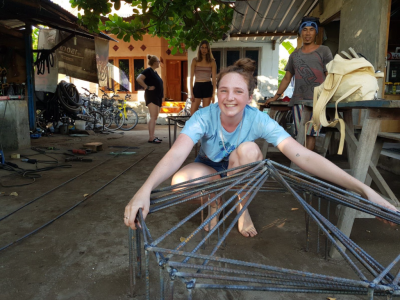 A new coral restoration project on the Gili Islands has been launched to help restore coral reefs, and educate others on the importance of protecting our oceans. The project is underway and the team are using science to help improve further coral research and coral reef monitoring techniques.

Coral restoration efforts are becoming increasingly important, as more knowledge is constantly revealed about the coral reefs and the increasing threat of coral bleaching brought along by global warming. Coral reefs have suffered significant impacts over recent years as a result of the impact of human and natural disturbances on their biodiversity and ecosystem functioning. These ecosystems are fragile and sensitive to changes in their environment and are at greater risk of degradation than other marine systems. With a significant decline in the health and fitness of the coral reefs around the world, it is now considered to be a crisis at a global scale.

Coral restoration has shown promising results around the world, with the closest example being the coral restoration project of Blue Corner Dive Center in Nusa Lembongan in Bali. The method called coral micro fragmentation has been successful there and has now begun in the Gili Matra Marine Recreational Reserve (GMMRR).

Gili Shark Conservation’s project mission is to restore coral reefs around the Gili Islands in Indonesia, to educate others on the importance of our oceans, and to use science to further coral research and coral reef monitoring techniques.

The project has comprised of multiple stages so far. The initial stages of the project entailed building the hex domes. These were constructed with locals, created out of iron bars. Then, the domes were coated with sand and epoxy to make a comfortable new home for coral to live and grow on. Through this process, locals were educated about the project.

Once prepared, the hex domes were dropped into the ocean. The restoration sites were selected by Gili Shark Conservation due to their importance as a nursery for Blacktip reef sharks and as home to a diverse and abundant range of fish species, according to RUV (roving underwater video) footage. They are very rich reefs and a perfect place for coral to grow (good water circulation etc). The restoration site was damaged and the goal is to restore it to its initial condition. Once in place, the qualified scuba divers started ‘coral gardening’. First, they harvested corals, by collecting lots of broken coral. Then the corals were fragmented, taken to the restoration site, and attached to the hex domes. Some domes have one species of coral attached and some have two, as an experiment to see if they will grow quicker due to competition for space.

The sites are under scientific monitoring to establish the success of the project as it continues. Harvesting broken corals ready for fragmenting The International SeaKeepers Society Asia Achievement Award In April, the Gili Shark Conservation Project was awarded The International SeaKeepers Society Asia Achievement Award, which recognizes an organization in Asia that demonstrates a responsibility towards the health of Asia’s marine environment. As part of the award, The International SeaKeepers Society committed to funding the first 30 hex dome structures of the coral restoration project of the Gili Shark Conservation Project. The award has provided the Gili Shark Conservation project with an amazing opportunity to help restore damaged reefs which are extremely important to a range of marine life. This is a wonderful example of different organizations from all corners of the globe working together to achieve something good, and something bigger than the sum of each of the individual parts.