El Niño and the Third Global Coral Bleaching Event: what has happened and can we see the light at the end of the tunnel?

As you may have seen in the news, corals have not been having an easy time this year. In fact for the last couple of years we have been experiencing the third global coral bleaching event, the cause of this has been a particularly strong El Niño.

What is El Niño?

El Niño is a global weather event, which occurs naturally every 2-7 years. It is distinguished by a shift in temperature patterns in the equatorial Pacific, which causes repercussions across the global climate.

El Niño forms part of the El Niño Southern Oscillation Cycle, this cycle describes important atmosphere and ocean exchanges and changes in the Pacific ocean. El Niño is the warm phase of this cycle, caused by warming sea surface temperatures in the central and eastern Pacific, this causes a weakening of the Pacific warm trade winds which blow across the ocean in an easterly direction and sometimes even causes a full reversal to westerly winds (see this great short video from the Met Office for more info).

A graphic released by NOAA on the announcment of this years event as the third global coral bleavhing event. It shows predicted levels of heat stress acorss the tropical seas, NOAA Coral Reef Watch 2015

The effects of this are felt all over the world. In Indonesia and Australia you get less rainfall, sometimes leading to forest fires. In the tropical Pacific you find increased rainfall, causing flooding in central and southern America. The effects even stretch as far as Europe, with El Niño identified as a cause of warmer than average temperatures.

Across the tropics El Niño causes higher than average temperatures and higher sea temperatures. Unfortunately this can spell bad news for corals. As you will know, corals are colonies of small animals called polyps. These coral polyps have a close relationship with an algae called zooxanthellae which lives inside their tissue. Corals are quite particular creatures and only like to live within certain conditions. They are happiest between 23-29° C and like to live in shallow depths that allow their zooxanthellae to grab the most food for them through photosynthesis. It’s a well-honed relationship, but when the water temperatures and light intensity go above the corals’ preferences this relationship can start to deteriorate.

High irradiance (light intensity) can cause the photosynthetic algae within the corals to become too active, producing oxygen in levels so high it becomes toxic to the coral. On top of this, high temperatures can cause the coral stress. In response to these stresses the corals expel the algae from within their tissues. This algae also gives the corals their pigmentation, so when the coral expels the zooxanthellae algae it loses its colour and appears ‘bleached’ white. The trouble with this is the algae also provides the coral with its primary source of food through photosynthesis, so when coral bleaching lasts for extended periods of time it can cause coral mortality. 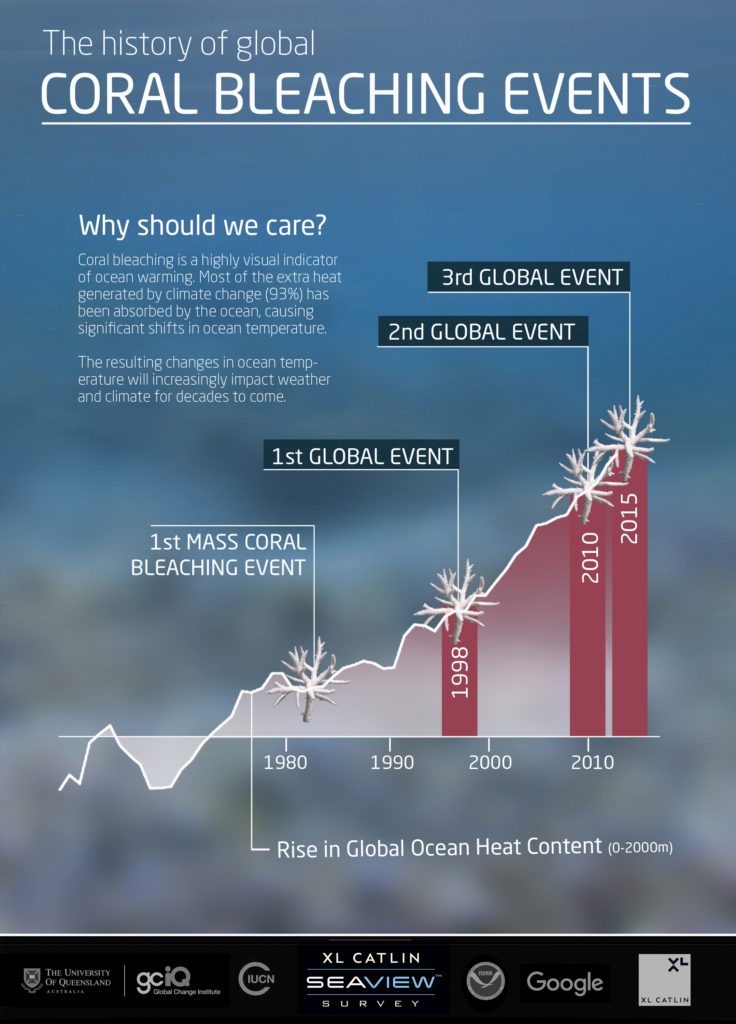 Global coral bleaching events are a relatively new phenomenon. The first one was declared in 1998 with a strong El Niño event, it caused 16% of corals worldwide to die. The second in 2010 was another big El Niño. The current global bleaching event was announced in October 2015 and has now become the longest event on record. The fear is that the longer these periods of high sea temperatures continue the more likely extensive coral mortality will be.

The impact and the light at the end of the tunnel

It is true that the impact of this coral bleaching event has been great. 93% of the Great Barrier Reef has been bleached and many of the reefs that make up this vast area are expected to have 50% or even 90% mortality. Areas of reef which have previously been less affected by bleaching are badly hit this year, the northern most part of the Great Barrier Reef is a good example of this, previously being the healthiest area of reef and now badly affected by bleaching.   Here in the Western Indian Ocean, the impact has thankfully been lighter than expected. We have been helped by storms passing through and the tropical cyclone Fantala, which passed over in late April, mixing and cooling our seas. A high level of bleaching has still been reported and some mortality among our reefs, but not on the scale of other regions of the world. The previous coral bleaching events in the Western Indian Ocean, particularly the widespread bleaching in 1998, may have helped precondition our corals allowing them to better cope with these El Niño conditions.

Here at Petite Anse, Mahé where our Reef Restoration Project is based we have been monitoring the reef through the coral bleaching event. Using the CORDIO bleaching survey method we are collecting data which contributes to a regional database to monitor and research this event. We have seen approximately 75% bleaching on our shallow reef and as we expected, our young coral fragments in our shallow coral nursery have been hard hit. Besides our monitoring protocol we have taken several measures to help mitigate the effect of the bleaching event on our coral fragments, (including creating a new nursery in deeper water) which you can read all about in our next blog.

As May passes us by so does the hottest season in Seychelles and this week in Petite Anse bay we are celebrating, after two months of 31°C we have finally recorded 29°C water temperature in our coral nursery!

Bleached acropora next to our coral nursery April 2016