An Interview with WiseOceans… Zoe Stevenson from Kent Wildlife Trust 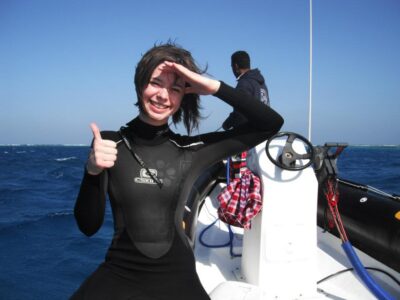 This week we are back on home turf with Zoe Stevenson of Kent Wildlife Trust.  Zoe has experienced the difficulty of getting a stable job within the conservation industry and has consequently been all over the world, fulfilling a variety of different short term roles.  Despite being disheartening at times, she believes this is what has given her the confidence, ability and experience to land her current position. She advises not to sweat the small things and throwing in a marine related pun here and there always goes down well… A girl of our own heart!

The ocean was my first love. I honestly can’t remember a time when I wasn’t fascinated by it, so studying marine biology at university was the natural choice for me.

After graduating, despite a few incredible volunteer research positions, I realised that I enjoyed talking to people about the sea more than I enjoyed studying it. It was a surprise to me, but environmental education has taken me all over the world, so getting involved with it is not something I regret. And I still get involved in research whenever I can. Things like National Whale and Dolphin Watch for the Sea Watch Foundation and other citizen science schemes are becoming commonplace so it’s not difficult to do.

The ocean is so big and diverse that spending my working life protecting, studying, and teaching people about it means I will never have a dull day at work.

I tell people that my aim is to “save the dolphins” which is quite vague really. At the moment educating as many people as possible about the importance of our oceans, and inspiring the scientists of the future seems the best way to do that, so environmental education is a perfect fit.

Working with Kent Wildlife Trust on their Guardians of the Deep project puts me in a fantastic position to help build a network of inspired marine champions all around the Kent coast, as well as encouraging children to get interested in the ocean, hopefully inspiring the ocean scientists of the future.

In a more practical way, I recently trained to be a BDMLR Marine Mammal Medic, so I can assist in any strandings and seal rescues in my area. That qualification has been on my wish list for a while, I was so happy when I got handed my certificate!

I worked hard and stuck at it! Since graduating from Swansea University I’ve had a very varied career, from wildlife guiding on the West coast of Scotland, to environmental education in America and what feels like everything in between. 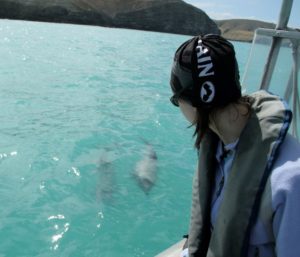 The downside of environmental education is that most of it is very dependent on external funding, which means that short term contracts are the norm. Before I got my current position with Kent Wildlife Trust the longest contract I had was 10 months, and there was a lot of volunteer positions in there too. That meant a lot of going back home and working casual jobs while looking for work that I really wanted to do. There were times when I was tempted just to go back to university for a bit of stability, or settle for a less than ideal job, but ultimately I knew I’d never be happy at work unless I was doing marine environmental education.

I’m grateful now for all the different jobs I’ve had. It’s given me a wide perspective on how different groups look at marine issues, and the knowledge and skills I have gained from all those different positions made me confident I would be able to take on the responsibilities of my current position.

Getting paid to be on the beach! It’s not quite like that, but sometimes it does feel like it. I love being outdoors, and the fact that I get to enjoy and share with others one of my favourite environments during work hours is an absolute dream. It makes all the desk time I have to put in worth it.

Sometimes talking to the public can get frustrating, as you seem to say the same thing over and over to different people. You wonder if any of it is sinking in at all, but every so often you will see in someone’s eyes when it just clicks, and that’s the moment I work for.

Children are so empathetic about the natural world that working with them is a real joy. Recently I was teaching a group of children about plastic pollution in our oceans and one little girl suggested that we create a ‘plastic magnet’ to scoop all of the litter out of the ocean. I really hope she becomes an engineer when she grows up because it is ideas like that will really change the future of our oceans.

Don’t stress over the wording of emails! I know this sounds a bit weird, but when I think about the amount of time I spent worrying over things like choosing between “I was wondering” or “I am writing to enquire” I have to laugh. It really doesn’t matter that much, so long as you are polite and to the point.

Comedic timing! When presenting to the public, or giving a training session, a well-placed joke doesn’t go amiss. Comedic genius isn’t necessary, but a good marine related pun never fails to go down well. Try not to get too tide down by a specific joke though, it’s better to just go with the flow and decide in the moment what will work.

Try and become comfortable with public speaking. You may never have to speak to thousands at once, but chances are, no matter what discipline of marine conservation you go into, at some point you are going to have to speak to a group of people. Things like debating societies, or volunteering to present a group project in school, can really help boost your confidence. I competed at Speech and Drama festivals right up until I went to university, so thankfully speaking to crowds is second nature to me now. 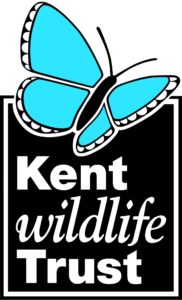 I love all cetaceans (whales, dolphins and porpoise), but my absolute favourite has to be the Hector’s dolphin, one of the world’s smallest dolphins. I spent two months in New Zealand helping a Ph.D student study them and they completely stole my heart. For such a small animal they are incredibly charismatic and it’s impossible not to develop a soft spot for them. The fact that they are endangered makes my time with them that much more precious, and I really hope that conservation efforts to save them will be successful so others can fall in love with them the way I did.

At my first day of work in the previously mentioned job in New Zealand, I accidently dropped the most expensive piece of kit over the side of the boat! Talk about a terrible first day! Luckily a diver found it a few days later so I hadn’t single-handedly ruined the last 2 months of a three year research project, but I don’t think I will be forgetting that moment in a hurry.

Thanks Zoe, your infectious enthusiasm cannot fail to inspire the next generation of marine conservationists.