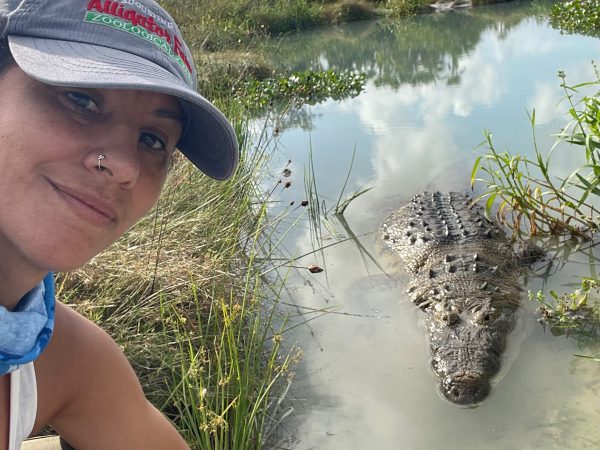 Top Tip: GET OUT THERE!

At a young age I realized some of the most vulnerable species on earth were predators, and that there wasn’t enough advocacy for these creatures that were some of the most important creatures in keeping an ecosystem in balance. There was so much false fear and I couldn’t understand why people could have such hate towards predators when it seemed all people needed to do was become educated about the Dos and Don’ts living alongside predators like crocodiles, sharks, snakes, etc. I decided to be a voice for those animals that were being demonized and sensationalized by movies and news media, to provide the facts and squash the myths about predators while also initiating pride and stewardship over one’s environment.

As a scientist I value research to assist in conservation efforts, but I have learned what will ensure the long-term success of coexistence and conservation of wildlife and its habitat is involving local communities and furthering education. CRC is a mere catalyst when it comes to conservation as it will be the community that ensures biodiversity is preserved, especially when community members feel pride and stewardship of one’s environment. CRC works closely with the community, gathering and utilizing historical knowledge to not only preserve wildlife but also culture. Wildlife, like crocodiles and sharks, are part of our culture and if we lose them, we lose a bit of who we are- we lose a connection to our family roots and our history. As I always say, conservation isn’t just about wildlife, it’s about people. And it’s this foundation that I believe has helped the CRC in creating a CrocWise community in our area in a fairly short period of time.

I created my own position! I kind of always knew I wanted to create my own non-profit. Starting a non-profit takes a lot of determination and commitment; you need to have the type of personality where you can shrug off “NOs” and set backs. You must take challenges as a learning experience and move forward with a positive outlook.

The part of the job I enjoy most is seeing the attitude of the community change towards crocodiles- it’s gone from one of fear to one of appreciation and excitement! It’s hearing community members educating visitors or new residents about the Dos and Don’ts living alongside crocodiles. I also love working with kids, especially those part of our Next Gen Croc group and seeing them grow in their scientific knowledge and experience.

I have seen our approach to conservation making a difference. An example I can think of comes during the Covid lockdown.

During this time illegal hunting in the world was on the rise as people didn’t have the money to go to the market and buy food. A crocodile was killed in our lagoon, and the men were caught by the police as they were skinning it. Despite me being heart-broken, I had various long-term residents and conservationists tell me to look at the positive- several years ago before our community outreach and education, the police wouldn’t have stopped the men. They would have ignored the men skinning the crocodile. Additionally, people on Facebook were outraged, not making comments such as “let’s make some boots,” etc. The police arrested the men who were taken to court and the community was deeply saddened- all because of the outreach and continuous education we have done.

I know our methods are working and we will continue to build a community of pride and stewardship for nature.

I wish someone would have told me that as you climb the ladder in conservation, you better be ready to interact more with people than humans. Also, that many times you need to gain the knowledge and language of politics as politics very much influence the success of conservation efforts. Also, education via preaching is not an effective way of creating acceptance and tolerance. I have learned having a conversation where everyone sits at the table as equals is the best approach for successful education and conservation.

I always got in trouble in school for talking too much or being too energetic. Well, those skills have come in really handy as networking, building relationships with various community members, and having the energy fuelled by passion and determination has led the CRC in moving forward in a successful direction.

My advice to a young conservationist is GET OUT THERE!!!! Volunteer and intern whenever you can. The more you put yourself out there, not only do you gain more experience, but you also create a larger network. Networking has been key in assisting me in my career. If you have questions for an expert, email the expert! Don’t be shy, connect with other scientists! And if you are ever rejected or hear NO to an opportunity, so what!!!! Don’t get dissuaded, move on to the next opportunity! Everyone has been rejected so don’t feel like a NO means you aren’t meant to do what you love!

“If a woman loves a crocodile, she takes on its character.”—Ancient Egyptian Proverb

Patience, strength, determination, focus – gotta love a crocodile! There is a reason they were and continue to be revered by many ancient and indigenous civilizations and societies!

One of my most unforgettable moments in the water was conducting a nocturnal eyeshine survey on a kayak in a narrow stream and alongside of me pops up a 4m American crocodile swimming alongside me. The crocodile seemed just as surprised as me, then he went down and swam away.  It was so amazing to be kayaking alongside a croc like that and it was a perfect example of how (at least this species) wants nothing to do with humans and that we can coexist with these creatures.