An Interview with WiseOceans… Lauren Sparks from Indo Ocean Project 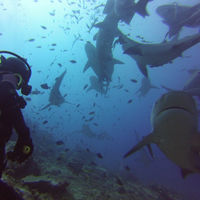 While her qualifications opened doors, it was her practical experience that really helped her land her first marine conservation job. 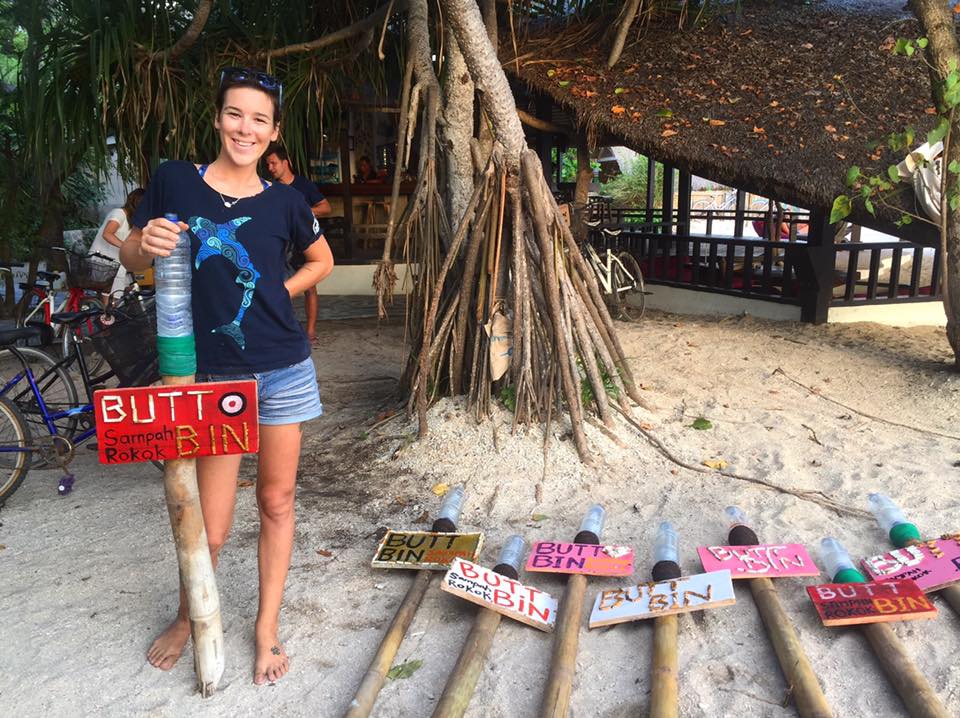 Even though I come from central Canada with no access to the ocean, I was always happiest when I was by the water. Like many Canadian’s before me, I packed my backpack and travelled to Australia on a Working Holiday Visa right after college. Early into my yearlong trip I started working at a hostel above a dive centre in exchange for my diving certifications. My first dive was where it all began…. There was a big storm and high swell and my instructor went down the line. On the surface I took my regulator out and looked at the captain and said “I don’t want to do this….” Then I put the reg back in my mouth and dragged myself down the line. It all changed at 2m. When the chaos on the surface faded away, I was completely consumed by the ocean. The contrast of the storm above and peace below was shocking. On my first dive I came face to face with 10 Grey Nurse Sharks. From that moment my life was never the same. I completed my Dive Master course at a dive shop in eastern Australia famous for its shark diving. My childhood passion became an obsession. 10 years later and I haven’t stopped diving.

I always cared for the ocean but not until you experience first hand how powerful and mysterious the ocean is do you start to really understand the issues surrounding its survival. I began to understand the connection all living things have to the ocean in a way that a textbook or lab time could not explain. The fight for a healthy and clean ocean is a fight for life as we know it. One of my favourite things to say to people, although an extreme example, is that if everything on land died today, it wouldn’t have much effect on the ocean. But if everything died in the ocean, life as we know it would never be the same.

I found I had a knack for communicating and translating science to the general public. So I started working for youth conservation organizations giving presentations and discussing the current issues and getting people excited about diving and the ocean. It all kind of snowballed from there.

I became a dive instructor in 2007 and went back to school to study biology. I went to school to learn everything I could about the ocean and started working as a research diver in the Caribbean, South Pacific, and South East Asia. I definitely wouldn’t have got my first job without my education, but the real reason I was hired was my experience in the field. I worked in multiple dive shops and liveaboards around the world. The good the bad and the ugly. It made it so my expertise in diving and my first-hand knowledge of the underwater world was valued more than a degree.

Shark conservation was an easy first step into marine conservation. Being an apex predator, their importance in maintaining a healthy ecosystem is an obvious one. By protecting sharks, I was protecting the reef, and the critters, and the local coastal communities that rely on reefs for income and food. I focused on learning as much as I could about sharks, and then was hired as a field scientists for a shark conservation and research facility in Fiji.

I worked as a research diver and dive instructor for large volunteer organizations around the world and was able to meet and work alongside like-minded people. Relationships I formed in my early conservation years led me to creating a grassroots conservation project in Indonesia 3 years ago. It has flourished and grown but now I want to expand the sample area to marine parks across Indonesia. That way we can compare different marine parks, see what strategies are working and what aren’t, and be apart of real change in a developing country. I landed my current job because I created it myself! But I couldn’t do that without the amazing support from my local and international partners like Dr. Mark Bond from Florida International University, and the most knowledge diver I know and co-founder of Indo Ocean Project, Hery Kiswanto.

When working for the large organizations I found a lot of important things get lost in the hierarchy of the corporation. The real power of the project was happening on the ground with the staff and volunteers that were there and cared and made a difference day to day. So I decided to cut out all the corporate stuff and start a grassroots organization myself. With a great team around me I was able to make that happen!

I love developing small projects and combining research and local initiatives and being apart of real change in coastal communities where the real action is happening. I truly believe that it’s the people on the ground that can effect the most positive change. And little by little, a little becomes a lot. It’s so fulfilling to watch a program that was once just a dream become a plan, and then reality.

Seeing my student divers grow into amazing scientists and conservationists and their contribution to the world has defiantly been the most obvious ways I have made a difference. Creating a network for young scientists and helping new divers reach their potential. I like to think I have played some small roll in their success, and I’m so proud of them. (You know who you are Shark Warriors!)

There are so many ways to achieve one goal. Be open to change and let projects and ideas grow organically, but set achievable deadlines for yourself.

I originally went to school for Theatre Arts, and did a double major in Theatre and Biology. Once I changed my field to science and research I thought theatre was in my past. But I use it every day! I always say that biology gave me the knowledge, and theatre gave me the ability to communicate it to the public. I feel confident and comfortable in front of large audiences and giving presentations to people from all around the world. Being able to share my passion for sharks and marine conservation has been one of my greatest assets.

Get out there, join projects, meet people, get your hands dirty. There are more than one way of working full time in marine conservation, either through school and higher education, or through field experience. If school isn’t your thing then become a dive professional. Work for research projects wherever and whenever you can. Biologists rely on their relationship with conservationists and field workers to be their eyes and ears, while conservationists need biologists to get the data in the right hands to effect real change. It’s a critical partnership, equally valuable.

SHARKS! It all started with sharks for me. My research has been focused on shark and ray conservation. We have come so far in the last 10 years in our fight for sharks, breaking stigmas and changing international laws. But we have a long way to go.

As for my favourite species of shark…. Well that changes every day, on my mood, where I am in the world, and who I’m talking to! They are all special for different reasons.

But I also have a secret soft spot for the macro life… after spending so many years in Indonesia you learn to dive with your eyes open and your nose to the ground to spot those extra special macro guys. I always love those treasure hunts for the small and the strange! Pigmy seahorses, shrimps, nudibranchs, frogfish, all the creepy crawlies living on the ocean floor.

That is too hard to answer! To name a few…. Working alongside the bull sharks of Beqa in Fiji, or any time I go to Manta Point in Nusa Penida and see the conveyor belt of manta rays, or the first time I looked a Mola Mola in the eye at Crystal Bay.

But honestly, some of my most unforgettable moments in the sea is when I get to share the ocean with aspiring divers, conservationists, and scientists. The first time I saw a whale shark was in Indonesia while teaching an Open Water course. My class of 4 were on their second dive day, we went to a dive site that I have been to 1000 times. While doing our safety stop a whale shark cruised right by us! It took me over 2500 dives to see one, and my lucky students saw one on dive number 2!! You can dive the same site over and over again and never know what’s around that corner, the ocean never stops surprising me.

Thank you Lauren, we totally understand why you can’t pick a favourite shark. They are all incredible!

Don’t forget to sign up to our weekly job alert emails and keep an eye on our WiseOceans Careers pages so you don’t miss your dream opportunity in more marine conservation.