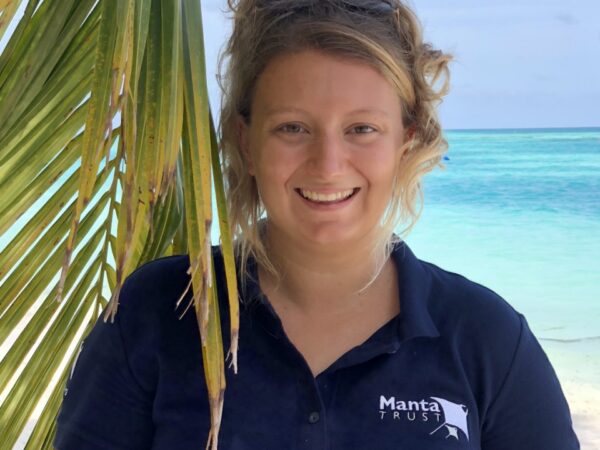 Top Tip: No matter how many jobs you apply for even if it feels like hundreds, you only need one to reply and give you a chance of employment

When I was 8 years old my family took me on vacation to the Maldives. At this time I took my first breath underwater, saw dolphins for the first time and completely fell in love with the underwater world. I left that holiday adamant that one day I was going to work with ocean animals. As my passion grew as I got older, I began to learn more and more about what the underwater world has to offer and what impacts we as humans are making. Growing up in a small village in Oxfordshire, England I had to rely on my ocean fix during family holidays. Through my fascination with marine life I used every chance I could to tailor my high school classes into marine-focused projects if given the freedom to do so.

I was working in the Maldives as a Resort Marine Biologist / Diving Instructor and contributed survey data and photographic IDs to the Manta Trusts Database. Through this connection I learnt that they were hiring for a new permanent position. This was Project Manager for Malé Atoll where I have worked for the previous year. After this year I moved to a brand-new resort (InterContinental Maamunagau). I helped set up and run a brand-new Manta Trust project base and partnership in Ra Atoll, Maldives.

Being out in the field. I love being amongst the ocean wildlife. When I am snorkelling amongst feeding manta rays I get completely lost in their world. Our main method of research is to free dive under the bellies of manta rays in order to capture photographic IDs of their unique belly spots. I love that in one single breath you can capture an image that will tell us so much about the populations of these enigmatic creatures.

Manta Rays are a fairly understudied animal, not so much is known about them and their life-history and why we should work on protecting this vulnerable species. I love contributing to this realm of research.

Educating the local community. One of the most inspiring projects I have worked on as part of the Manta Trust is the Marine Education Program “Moodhu Madharusa”. Joining the students of Dhiffushi School in Malé Atoll, engaging them about the importance and beauty of our oceans as well as raising awareness on ocean pollution was an amazing experience. As part of the program I took the students snorkelling and a few scuba diving. For some it was their first time ever even swimming in the water, so to achieve snorkelling at ease was a huge achievement for them as individuals.

I wish I had known what damage my daily choices can make to impact our oceans. Growing up and even through University I was always naïve to how much plastic I use on a daily basis. From shampoo bottles, to plastic food wrappers, it is a part of our daily lives. Coming to islands where the plastic gets washed up onto the beaches and seeing photo-degradation and micro-plastics for myself was a real eye-opener.

I thought that being an Open Water or Advanced Open Water diver would be enough to be a Marine Biologist. But becoming a Divemaster/Instructor was the best choice I ever made in order to pursue a career in Marine Conservation.

Teaching Skills. I never thought about the idea of teaching people as part of my career. However, marine education is a vital part in engaging local communities and sharing wisdom on marine conservation and the work that we do.

Stick at it. No matter how many jobs you apply for even if it feels like hundreds, you only need one to reply and give you a chance of employment. Don’t be defeated if you don’t receive replies, something will work out eventually.

Becoming a dive instructor was not something I ever considered as a career, but I wouldn’t be where I am without it. Sometimes Marine Biologist jobs come in short term contracts, but instructors are constantly needed around the world, every day there are job openings. Every Marine Biologist position I have had is because I was working in that particular country as a Dive Instructor temporarily.

Manta Rays of course. I only saw my first manta ray when I moved to the Maldives. That initial sighting of something so large yet so graceful underwater is a feeling that never goes away, even two years later. I love their curiosity towards humans which make for amazing encounters. I love learning about their ways, habits and determining each one’s personality the more I get to know them (I definitely have favourites!)

The first time I saw a cyclone feeding manta rays. From having worked in an atoll where the manta rays tend to clean rather than feed, I was not used to seeing them in particularly large numbers. The first time I saw more than 100 manta rays coming up from the deep in a huge feeding frenzy my breath was taken away. I forgot all about the fact I should be getting belly IDs. I just watched the madness unfold! What was even more amazing was it was only me and my colleague in the water. 100+ mantas to 2 snorkellers is not something you come across often!