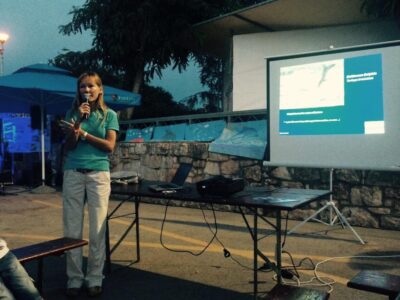 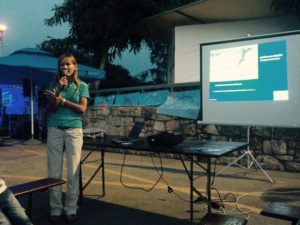 This week we join Darja from Vivamar who shares her passion for the dolphins of the North East Adriatic.  Darja’s passion and determination has lead to her setting up and running a research NGO. Darja says has faced a lot of hard work to get to where is is and her advice is never give up, even if it is so hard. This is paying off as the vital research Vivamar does in the Adriatic is being given to Ministries and being included in action plans.

As a child I have been feeling already connected to the sea. My parent always took us with my brother to the sea and while fishing small fish for the dinner we many times observed magnificent jumps of the dolphins in the sun set. This was so amazing and inspiring to me. Then with 11 years of age I already knew I will be a biologist. There was never an option “B” for me. And in the course of specialising first in physiology I’ve got to know how incredibly dolphins, as marine mammals, are adapted to live in the sea. Along with their intelligence. And then it “came into me” – I know I have to protect our last resident dolphins (common bottlenose dolphins) in the North East Adriatic before we lose them. Two species (striped dolphins and common dolphins) have already gone from this area.

After high school, that was oriented for the natural and mathematical subjects, I matriculated at the University of Ljubljana in Slovenia. We had a very high level of the studies and broad spectrum. So it was possible to have a nice overview through all biological topics, from biochemistry, genetics, to ecology and the cell biology and physiology. That certainly confirmed my decision in what I want to do later on. After 5 years of pursuing the ‘diploma’ (yes, it’s two years longer as nowadays bachelor) I have a Master of Philosophy which was additional 3 years of studies before being able to do a PhD for example. I studied bioacoustics of butterflies at that time, although my heart was always with the dolphins and I, in parallel, already started to do the first collection of the distribution data about the dolphins living in Slovenia and the Croatian part of Istria. I slowly succeeded to buy a boat, which made me mostly full of problems before being able to go really out to sea and observe the animals.  But finally, with the time the better boat came and my dreams came true, being fully able to go out. Still there was a “real team” missing and…

…so it came in the year 2014 that my job at that time was closed down. I was panicking a bit because the costs were still running in but no substantial money came in. Then,  with the spiritual support of some precious friends, I sat down, did the analisys and found out that it was finally time for me to start being a dolphin researcher and conservationist in full time, and all was worth it. Only with the help of volunteers being present and bringing their financial participation as well as many hours of sitting behind the computer it was now possible to publish the first peer reviewed article about the distribution and abundance of bottlenose dolphins off Istria. Amazing.

Of course being with the dolphins out at sea (laughing). Each time there are some little “differences” in how they behave and they always succeed to amaze me. They are just unbelievable. But also I see from year to year bigger pressure on this local population from human activities so it’s necessary that we do the monitoring and are able to report about the situation. Then from this we send the potential articles or posters from the international conferences to the Ministries of Slovenia and Croatia as well as their agencies for the environment and space. And they are the ones who have the power of implementing the action plan. We play an important role in giving them the first hand data, analysis and the results.

Oh yes. I am absolutely happy that we do the research in the NATURA 2000 area, which is the only one in Croatia that was defined there for the dolphins. But no one else does any research or monitoring but our small Vivamar NGO. So I’m quite proud that we are able to tell the officials about the situation. Namely Adriatic in its north part is very shallow and therefore ecologically very sensitive. It’s even too exploited already (pelagic fish stocks are at the brink of the possible recovery. Still there is no good management plan to make the situation better). And any loss of the species from the food web would mean a threat and a serious destabilisation of the entire marine ecosystem. Yet alone of the top preadorts such as the dolphins. Therefore our work is of a BIG importance. And right now we are already writing further research article regarding the clearly negative effect of a nautical tourism on the dolphins. It’s another thing that is completely unregulated and the dolphins are clearly disturbed by it. So that’s where I think our work is important to be written scientifically and be published. And hopefully then it’ll be also read and be as an initiative to sustainably execute the dolphin watching tourism.

That sponsors in the area are completely not supporting and not willing to hear about any help. I should have not spent hours and days walking from door to door and ask them for the help. It is much more effective for the studies to do it with the precious participation of volunteers. Regarding the sponsors it is actually sad, because exactly dolphins, as the key species, take care for the healthy sea, from which lives the entire Istria. It seems that if we would be a big organization that maybe they listen more. But even so, being small we do big things. And this is the filling the inner energy that brings me further.

I was so in love with the sea, that already with the 17 years of age I did a boat licence and become a skipper, so regarding the nautics all was done before the dolphins. But yes. Cooking. I don’t have a family and never liked to cook. And now, together with the volunteers, I have to cook twice a day, haha. Someone has to! And I found out it makes even fun! And we exchange the recipes and we have started to compile “the Vivamar international cooking book”. 😉

Never give up, even if it is so hard. Because the prize is waiting out there in the sea when you KNOW that you have really done something so great as is helping to these non-human personalities out at sea. And seeing those future students coming to the programme and then they find out with the help of Vivamar, that that is exactly what they want to do for their career. It’s rewarding to see this. 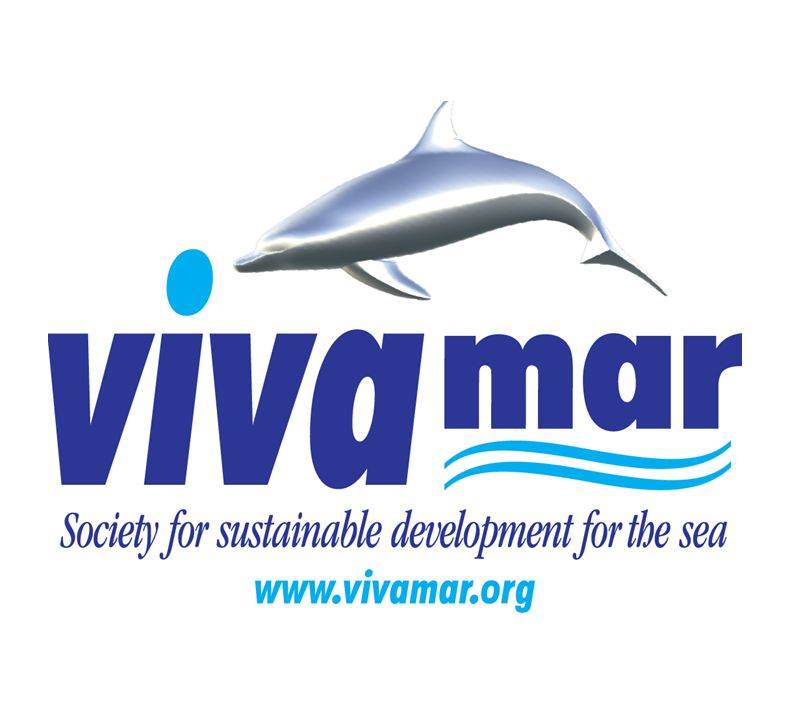 Two years ago we saw a newborn baby dolphin that we named “Free” in our catalogue. Mother “Guba” and the whole group was so protective for the little dolphin and whenever we would see them quickly swam away from the boat, Free being in the middle of the group. Then this year, in the early spring, there was a female dolphin with a calf swimming around the boat, other dolphins being a bit further away. And she repeated these circles around the boat. The sun was shimmering and we were starring into the reflecting surface of the sea searching when the female would come up again with that calf. And guess what? It was Guba with her Free! Like she’d not be so careful and vigilant anymore of our boat and like that she would want to show us her Free that has made it already through the second winter. I guess no further “anthropogenic” comments are necessary, haha. I will leave them to the readers. These animals are just amazing.

Thank you Darja, you passion is infectious. Along with this your research is vital especially when it is the only research and hope for these dolphins in this area.