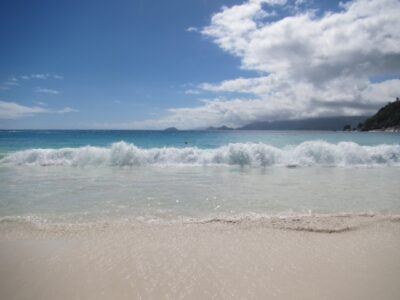 “A thousand what?” you will ask. 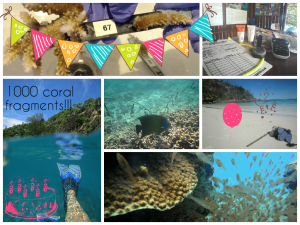 Last week we announced that we have reached our first milestone for our Reef Restoration Project: a thousand rescued coral fragments in the coral nursery!

Since the official launch, only just over 3 months ago, the 26th March 2015, we have collected, cleaned, doctored and loved a thousand coral fragments.

To be 100% honest we had expected to have a thousand fragments in the water a day before we actually did, but, as always happens when making plans with nature, they got changed along the way!

The reason why we had to change the plan is a very funny story, starting with a lucky marine biologist (me) who is used to working in optimal conditions and forgot to consider waves…

As a justification, I can say that waves rarely hit Petite Anse, as the bay is pretty much protected from the winds all year round, so naturally I wasn’t expecting what happened to happen!

As we usually do during our coral gardening demonstration at the Coral Cabana, together with some guests at Four Seasons Resort Seychelles, we prepared  50 coral fragments. The fragments, once ready, are then to be brought back to the water and placed in the coral nursery, where they will spend about 9 to 12 months before being transplanted to the reef. Unfortunately that day, on our way to the coral nursery and still in the shallow water, a sneaky wave caught us, leaving some with no fins, some with no mask and me with an empty coral basket! All the coral fragments previously prepared with love and care scattered on the seafloor, carried here and there by the wave action! Not the most dignified any of us have ever looked…

The reaction from resort guests was unexpected and so nice at the same time: a lot of the guests that were in the water started to look for the coral fragments; some others were looking for them close to the shore, in case the wave had brought them there, and one guest was following the researchers with an empty bucket so we could collect the fragments found. The result of this crazy “treasure hunt” was great, as all together we managed to find 40 fragments out of 50. Not bad at all! 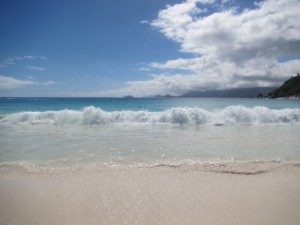 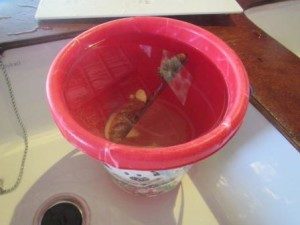 However even with this hive of helpful activity, still 10 fragments were missing, lost to the pesky waves, and we remained just short of our one-thousand milestone. We thought you might all like to hear this story as proof that even us pros are tipped ‘elbows over knees’ by waves on occasion!

But what an amazing feeling seeing all these people so motivated to save the coral fragments!

Anyway, it is now time to celebrate the first 3 months (and first one thousand fragments) of our Reef Restoration adventure.